How to Troubleshoot Surface 3 Pen or Surface Pro 3 Pen 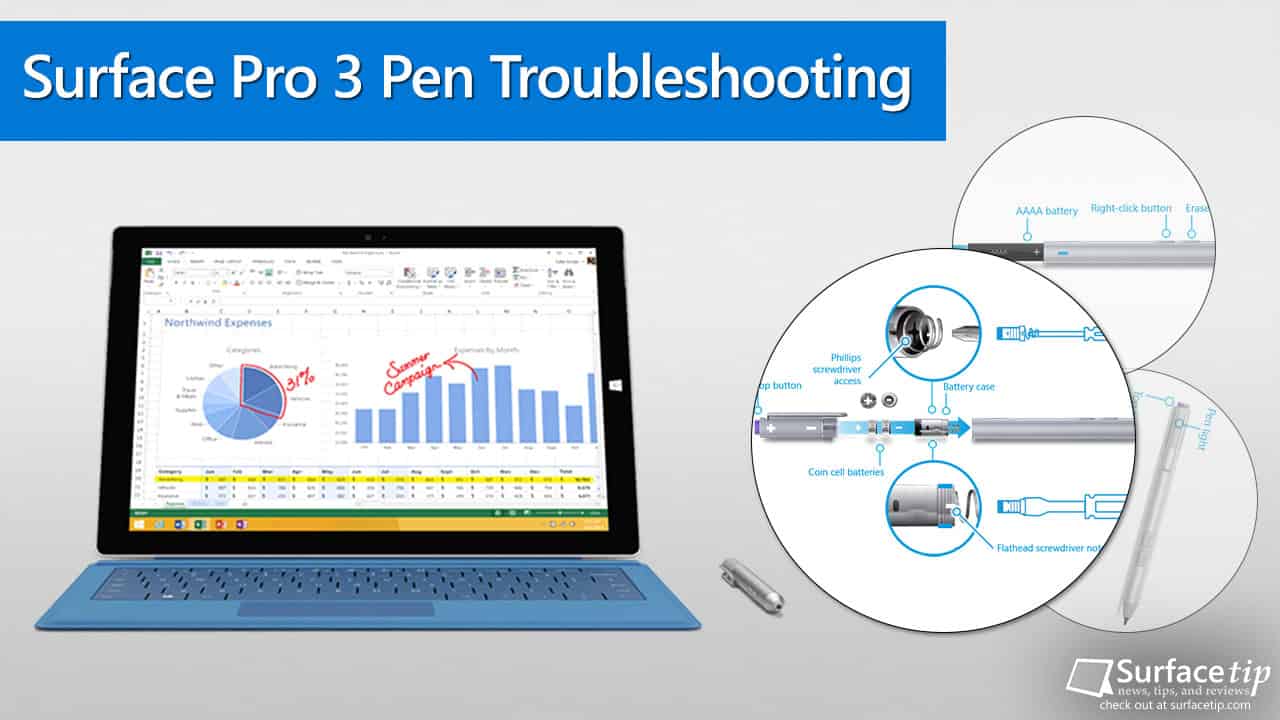 Microsoft Surface Pro 3 is a big innovation with three years in the making of the Surface history. It has new designs and technologies including lighter, thinner, faster, and larger than previous generations. Moreover, it also introduces the new Surface Pen that using a new technology called “N-trig”. The Surface Pen shipped with Surface Pro 3 has 256 levels of pressure sensitivity.

The new Surface Pen is better than the previous generation developed with Wacom technology. It now allows you to have a better writing experience including the ability to erase with a dedicated eraser button. In addition, it also has a dedicated right-click button too. On top of that, by pressing its top button, you can instantly take a quick note even your Surface Pro 3 is locked or asleep.

However, all functionalities made by this new Surface Pen required an active power supply. It is now required batteries to do it jobs. As a result, it becomes more complicated and more likely to has more issues as well. So, here we have collected all possible issues and solutions for you, in case you want to troubleshoot it by yourself.

Microsoft said the Surface Pen will last for 1 year, however, real battery life is dependent on the amount of real usage. There are two sets of batteries used within a Surface Pen. The Surface Pro pen need those batteries in order to offer its full functions properly including:

When to replace the Surface Pen AAAA battery?

As this battery supply power to the Surface Pen to operate its stylus functions, you can notice its problems when you experience the following symptoms:

How to replace the Surface Pen AAAA battery?

If you experienced problems as listed above, you need to reinstall or replace the AAAA battery. Here is how (described in Microsoft support page):

When to replace the Surface Pen coin cell batteries?

As this battery supply power to the Surface Pen to support its Bluetooth connectivity and top button actions, if it has problems you will notice the following symptoms:

How to replace the Surface Pen coin cell batteries?

If you experienced problems as listed above, you need to reinstall or replace the coin cell batteries. Here is how (described in Microsoft support page):

Step 1: Unscrew the top of the pen from the bottom, leaving the paper label in the top in place.

Step 2: Do one of the following to remove the battery case:

Step 4: Slide the top of the pen down over the battery case. Tighten the case just until you feel resistance. Don’t overtighten it.

Note If you hold the pen top sideways and slide the battery case in, the coin cell batteries may flip over before they’re secure and in their proper position.

Step 5: Screw the bottom and top of the pen back together.

You may need to pair the pen with your Surface again after you change the batteries.

Otherwise, if you have no problems with the pen write, you might get a defective Surface Pen. Contact Microsoft for service or replacement.

Note Some apps might not support the right-click and eraser buttons, make sure you have tested with the Microsoft OneNote app.

The Surface Pen’s top button is primarily used by default for quick access to OneNote app in Windows 8.1. However, since the release of Windows 10 Anniversary Update, you now have options to choose which actions you want to take including the new Windows Ink Workspace. There are some root causes that the top button doesn’t take its actions:

You can quickly access to OneNote or Windows Ink Workspace by just pressing the Top button in a range 10 meters from your Surface. As it uses Bluetooth 4.0 LE, you need to pair your Surface Pen to your Surface first before you can use it. Here is how (described in Microsoft support page):

Note If the pen already appears in the list of Bluetooth devices, you might need to remove the Surface Pen from the device list and pair it with your Surface again.

First, make the Surface Pen discoverable. Press and hold the top button for about 7 seconds, until the light in the middle of the pen clip starts to flash.

On your PC, select the Start Windows logo button, then select Settings > Devices > Bluetooth & other devices.

Make sure Bluetooth is on, then select Add Bluetooth or other device > Bluetooth. Choose Surface Pen in the list of devices. Follow any other instructions if they appear, then select Done.

We appreciate hearing your thoughts, questions, and ideas about “How to Troubleshoot Surface 3 Pen or Surface Pro 3 Pen”.